Answering critics
Woman hater? A frequent blue pill claim about me and the RedPill world at large is we hate women. It’s fucking stupid. Most men have women in their life to varying degrees. Are we to believe RedPill men hate them? Recently I was called a woman hater by a Christian girl on the interwebz….#1 worst kind of women are Christian women. They get all the normal men bad women good message and then get a second helping of it on Sunday with, what they believe to be, a stamp of approval from God Himself.

The idea men hate women is ridiculous, me even more so. The women in my life are, my  daughter,  the Girls who are dear to me, one who is pregnant with my child, a sister, sister in laws, nieces, cousins of all sorts and an elderly lady who chose to live with me vs her kids. Are we to believe I hate these girls and women? My own flesh and blood? A woman who is to be the mother of my 3rd child? Well it’s a lot easier to say “you hate women” then to take an honest look at the unpleasant reality of women.

I was also told by the same girl I am not religious which is sort of true. I have faith not religion. I am not tied to some man-made denomination and their made up rules. For whatever reason, catholics are quick to make this charge, maybe because they have the largest number of made up rules? I do not talk about God, faith and religion much because most men are not qualified to have the decision. They are to low on the masculinity quotient to understand God and His ways. The more I talk to a man about such things, the more I have confirmed his place in the hierarchy of men. The Almighty God is a God for men, not these eunuchs who try to pass themselves off believers. The Almighty God is the God of war, the commander of the host, the Divine warrior and the God of Justice. Eye for an eye. That is Justice and mercy as it makes the punishment fit the crime but doesn’t go overboard. In the Old Testament He slaughters His enemies and demands terrible prices for crimes against His way. Most men what to turn Him into some kind of dope smoking flower child / magical wish granting Santa Claus hybrid. To understand God, a man must have balls (eunuchs not allowed in His assembly). Coming to an understanding of the Almighty and His ways is not possible without a working set of masculine genital.  One of the Almighty’s 1st commands is to go out into the world, fill it with children and take dominion over the earth. That’s man’s work baby, driven by testosterone. The Patriarchs of the Old Testament were men among men. When Abraham had some kin folk stolen he didn’t go running for the police; he rounded up his crew and pulled off a commando raid. Hillbilly style right there. David got his bride by bringing back the foreskin of his enemy. Moses was right there in the thick of battle. They had more then one wife. Joshua was a warlord, and mighty man of God, eager for battle and committing genocide on the command of his God…. Long story short, I don’t talk about faith with men who have a feminized version of God. Women are to hold their tongue in church, womanish men should do the same

Check this link out( would have reblogged it but I haven’t figured that shit out yet)
http://sistemaperalta.wordpress.com/2014/12/05/a-checklist-of-25-things-to-ensure-youre-a-manly-man/
This guy writes some funny stuff and I follow his blog. His manliness checklist is pretty damn good but I don’t get the max score…. Now go read it and get back to me. Here’s where I fall on the check list

But anyway, here is the checklist to see how you stack up in manliness. There are also five bonus points that can be earned.

_ You own at least ten flannel shirts *(bonus point for twenty or more). own none. I think that is more of a yankee thing vs Southron thing. I own 3 long-sleeved shirts that aren’t dress shirts or camo. Not much call for them here. It was 60 degrees yesterday and I rode my bike for hours… and owning 20 shirts…. WTF?
_ You can hike a minimum of six miles on moderate terrain. LOL I use to walk for a living back in my infantry/SOCOM days
_ You’ve made something useful out of wood. I’m a fair hand at many carpentry tasks.
_ You get daily compliments on your facial foliage. LOL damn near daily and had an Afghan general stop to talk beards with me
_ You own more than one bottle of whiskey. and then some
_ You have never seen an episode of “American Idol”. I have not, nor Oprah or any of that shit. I have not had cable etc in 15 years and would tell the ex to turn it off/ change the channel when I walked into the room
_ You have used a bone as a toothpick. I have
_ Your diet is 75% red meat and/or bacon. And then some
_ You own a legit survival knife that actually does its job. I do, but I have never needed more them my buck knife despite 3+ decades of hunting, fishing, camping etc and 24 years of infantry/ SOCOM service. Those things are over kill if you ask me and a pocket knife and hatchet are better options
_ You can construct a tent without instructions. There are folks who cannot do this?
_ You need at least a six pack to get any kind of buzz. There are folks over the age of 8 who can get buzzed off beer?
_ You can’t tell the difference between kale and the stuff used to decorate Easter baskets.LOL We grew kale when I was a kid so I know what it looks like.
_ You have at least one friend that is a wild animal *(bonus point for an eagle). Sort of.I have a large mouth bass in a fish tank vs pet store fish and a Barn Owl lives on my property who I check up on
_ You find a legit reason to use your multi-tool multiple times per day. Multi-tools are beta
_ You own snake-proof boots and actually have a use for them. Nope. Snake proof boots are beta. I have been an outdoors men for as long as I can remember, have killed more snakes then I can count on 4 continents(including South America/ the Amazon rain forest) and never worried about having snake proof boots.
_ You’ve worked out with a log *(bonus point for throwing it after the workout). I have a caber to toss and two steel logs to press.
_ You’ve made a fire without using a lighter or matches. Yep
_ You’ve eaten a fish that you caught yourself. LOL a good amount of what I eat is what I have caught, killed or grew ( well sort of. I don’t do much of the gardening stuff)
_ You can diagnose what is wrong with your vehicle *(bonus point if you fixed it).Yep and yep, bike and truck too.
_ You can cook a stellar ribeye in a cast iron skillet. LOL I can but prefer to grill them. Its rarely to cold to cook outdoors here but I only owned cast iron cookware until the Majordomo moved in
_ You have chopped your own wood. Every year.
_ You have read at least five Louis L’Amour novels *(bonus point for ten or more). yep and yep
_ You have good accuracy with a tomahawk. I can hit a man@ 20 feet with one and make it stick…. Only have done it to wooden targets though. My 1st trip to Afghanistan we didn’t have interwebz etc so to settle all the dumb debates/ bar type arguments  folks state side would goggle we use a throwing ace and target. 1st one to stick the axe won. Apparently the sky is blue because of the lucky charm’s Leprechaun. Who knew?
_ You make ribs that aren’t just mediocre. People have told me, my ribs and BBQ have ruined all other ribs/ sauce for them
_ You can make at least five manly cocktails? Booze on ice, booze with no ice. Done on the manly cocktail front.
Here’s how you measure up:
25+ points = You are a mastodon of manliness.
20-24 points = You’re still a beast and on the verge of greatness.
15-19 points = You need some work but every grizzly starts as a cub.
10-14 points = C’mon, dude. Turn off “Bridezillas” and go put a gorilla in a headlock.
5-9 points = Stop buying Justin Beiber CDs.
0-4 points = Deduct whatever points you have because you don’t deserve them. You’re a zero.

How to spend a Saturday

Ride 128 miles, little under half of that in the rain. Smile the whole damn time because nothing much is finer then being on a bike in the rural South. Even when it rains.

prep the beef ribs. the apple pie is for drinking while you work 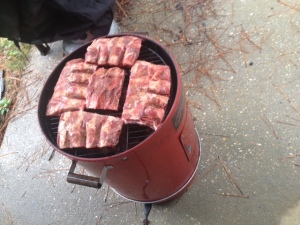 put the beef ribs on the smoker 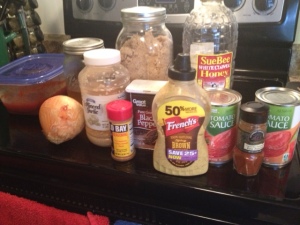 make the sauce, that’s old sauce in the tupperware. I added the old batch to the new. Sort of like making shine.

Drink apple pie, watch John Wayne movies and tend the smoker for the next 6-7 hours

Where threads are born off-topic

Filling in the Blanks

4 out of 5 dentists recommend this WordPress.com site

On the outer right side of history

The step by step guide to become a gentleman

Help is not coming. Neither is permisson. - https://twitter.com/Grey_Enigma

Vindicate the weak and fatherless; do justice to the afflicted and destitute. Psalm 82:3

The Art and Craft of Blogging