Back to my friend RJ…

RJ is not the most Beta of Beta’s but he is a little more Beta then he is Alpha, especially regarding the SMP and dealing with women. Not the biggest Blue Pill dude around but not full on Red Pill either. That came to a sudden stop last night.

Do you know what they say about jumping out of airplanes? Its not the jumping that kills you but the stopping; the Sudden Stop Syndrome and RJ’s sudden stop last night killed the Beta in him.

One of my cardinal rules for the SMP is, always have a side piece because she always has a side piece. She might be fucking him, or maybe she has Beta orbiters waiting in the wings but she has options and you are only one of them. Hell most likely not even her favorite option. Well that and it keeps your frame strong. No need to put up with much bullshit from a woman if your roster is 4 deep and three other chicks are waiting to spread their legs for you.

Any rate we were sitting around drinking pretty hard last night when his girl Blondie starts doing her fitness test thing, RJ do you like me, RJ do you have other women RJ I want this and that from you and I like you so much, you make me feel so safe and you are so nice to me… you’re the prefect man for me etc etc but I don’t know where we stand etc etc. We’ll she asks him “are we mutually exclusive?…. RTJ’s autonomic answer is of course we are, because RJ couldn’t fathom operating any other way. Well after RJ answered her, Blondie said she needed to cut some people lose then. Damn. All this time RJ was doing the nice guy thing and Blondie was spinning plates.

I could see RJ getting ready to explode, Blondie was drunk and clueless, so I grab RJ by the arm and pull him outside into the cold. Now here’s the thing, RJ could have exploded with anger etc, vented his feelings of betrayal or he could choose to pick up the knowledge bombs I have been dropping on him. RJ is smart man, and a man who doesn’t cotton to being taken advantage of, which is what happens to nice guys in the dating world. Being a nice guy in the SMP is like taking water balloons to tank battle.

Any rate I talk him down from detonating things with Blondie, and RJ has made the promise to always spin plates and never lead with his wallet. He plans on dropping Blondie when he has two other girls in his rotation and he plans on making it a nuclear level “next” but for the now he is going to keep her around and use sex as a weapon, pushing her limits and comfort zones, demanding she do things for him and him to her that she would normally never do… He is hell bent on using her like she used him and I doubt he will ever go back to his nice guy ways. Its cost him to much of his soul

Folks want to know why men do what they do in the SMP, and the answer to that question is as variable as there are number of men but surely a goodly part of that repairable answer is because of women taught them 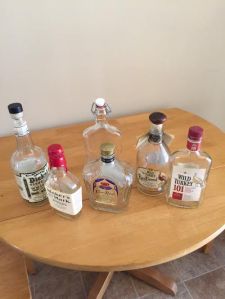 Being “nonjudgmental and keeping your opinion to yourself is an SMP tactical value all to itself. I think part of the appeal of the Bad Boy frame is women don’t feel judged(because of his lawlessness) and are therfore more honest about their questionable past.  If you are only looking for short term fun, then it doesn’t really matter but if you are looking for a long term deal, you want her to feel comfortable with you so she’ll blurt out her fuck ups…. I mean daring side.

Notices brothers in the SMP arms race, I didn’t say don’t judge them; I am telling you to adopt an air of being nonchalant about what she confesses to while you make your decision. Its part and parcel of purposefully and deliberate living.  Making rash, snap decisions doesn’t get you very far in life so slow down and think about what you are doing ( though there are times when you need to make a quick decision and act immediately) At some point she will drop hints about her pass; when she does this she is laying out bait to see if you bite. Bite hard and she’ll clam up and hide her bullshit better then you’ll ever imagine. Once she see’s you’re not a “judgmental asshole” she’ll open up and you’ll have better intell to make your decision on where she fits into your life. You can speed things along if you allude to your own “shady” past. Which for me is pretty easy because my present is shady enough.

Now some of you are saying that’s manipulative and my response is… so fucking what? The SMP/MMP is poisoned and you have to do right by yourself 1st and foremost. Remember this is combat dating and their are no rules but “win”. Sure some guys will want to jump on their moral high horse, but me, I want to win and I want to win at the lowest possible cost in time, effort and resources expended

For the record, I am one judgmental sonofabitch so I want the intell. Now I could snoop around, do a Google search etc but why bother when if you play it right, she’ll dump it all into your lap over a short period of time and its pretty easy to play it right. Women are dying to confess their bullshit to men who won’t judge them.

Though always ramped up internally, my demeanor has always been somewhat low key( that Southern country boy thing about going 100 miles per hour or not moving at all in play) plus training has lead me to hesitate just long enough to develop a better picture of the tactical situation (whenever possible; the trick is knowing when a few seconds delay will doom your ass or save you which requires experience). This outwardly nonjudgmental tactic is something I fell into naturally, saving myself all manners of future misery when I reentered the dating pool. Example #1 was this fitness competitor I dated in Hawaii. We went out a few times and before the magic date #3,she confessed via text messages, that she “revenged” cheated on her ex-husband only to find out he didn’t fuck around on her. I was not as red pill then as now, and was searching for another long term deal, so I quickly waved her off, but no doubt she felt safe owning up to it  because of my demeanor.

Side note, I suggest men delay anything long term/ committed etc until they have a N count of 30, give or take a few. At the 30 mark you should have seen enough bullshit from women to know what you are doing and know how to properly manage one long term. If the idea of managing a woman is barbaric/ primitive etc to you, then you are not ready to play in the SMP. You’ll get crushed unless you get extremely lucky. I dislike giving this kind of advice but its what I have seen work in the real world. A man who is reentering the SMP after marriage shouldn’t consider a long term deal until he has banged at least one girl per year married, ideally not until he can routinely set up 5 1st dates and convert at least three into a 1st night lay.

Any rate, not to long after that girl who preemptively revenge cheated on her faithful beta (I repeat myself) husband I ran into this stunning blonde girl and I mean stunning. Everywhere we went, men would turn their heads and women would give her the death glare kind of stunning. On top of this, she was my ideal. Sweet, kind, feminine, built for speed, utterly lacking in latent hostility toward men, her father was an Air Force veteran with SOCOM time so she had an idea about what my life was like, she wanted a large family and shared a goodly number of my political ideals. Well not to long after we start having sex ( which was once again by official date #3) she owns up to having done coke like 6 times, then she says she didn’t do blow, but has been around it because of her time working as a model. Its whatevers at this point, not something I am fond of, but not a deal breaker either. I decided to slow the emotional connecting shit down and to observe, to more fully develop the tactical situation and prep the battle field. Then she owns up to having been in a “gentlemens” magazine.  This is a deal breaker, but I liked fucking her and showing her off, I understood the power of pre selection(though I didn’t have a term for it @ that point in my life)  and I wanted to see how far down the rabbit hole things went. Now this is something I would have never thought of either. Not being a porn guy I would have never recognized her and at the time I was still apparently semi blue pill(in that hillbilly way; I was pretty sheltered really because my adult years up to that point where very secluded, tucked away in tier one and tier 3 world, working and training consuming all my time) and would never have thought about doing a back ground check. Well, nude modeling wasn’t the end of it. She did a girl on girl porn video and what made me give her the big fuck you, was her total lack of appreciation for how her actions hurt her father ( who apparently saw her in the magazine while in shopping at a BX). That was as far down the rabbit hole as I cared to go but who knows how far down the hole went?

So I nexted her. At one point I was way into her, and foolishly considering her as wife material, but something about my demeanor allowed her to “freely express herself”. Thankfully so or who knows what kind of misery would have been interjected into my life? and now you also have a partial understanding of why I say a man should have 30(+/-) bangs under his belt before he starts looking for a long term deal. Women are better at covering that kind of shit up then men are at discovering  her past.

Developing an attitude which allows women to feel free to “fully express themselves”  will save a man a lot of hassle. Mostly what it will do is allow you to see what their temper tantrums are like. How they handle anger is important to me, as is how they view their past mistakes. Being outwardly nonjudgmental allows them to confess their bullshit. If a chick owns her shit, then maybe her past doesn’t matter as much, but chicks who own their shit are unicorns

Banned By The ADL

"Tell me a fact, and I'll learn. Tell me a truth, and I'll believe. But tell me a story, and it will live in my heart forever." - Steve Sabol, NFL Films

Filling in the Blanks

4 out of 5 dentists recommend this WordPress.com site

On the outer right side of history

The step by step guide to become a gentleman

Help is not coming. Neither is permisson. - https://twitter.com/Grey_Enigma

Vindicate the weak and fatherless; do justice to the afflicted and destitute. Psalm 82:3

The Art and Craft of Blogging